I’m not sure how I got lucky enough to have kids who will eat just about anything with veggies in it.  I was the pickiest eater known to man, when I was growing up.  I’m still pretty picky, but I will eat most fruits and veggies.   My kids’ favorite soup is homemade vegetable beef.  They will gobble it up and ask for seconds!  When I spotted a recipe for Chicken Tortilla Soup on Pinterest, I hoped my kids would like it, but wasn’t convinced it would be a keeper.
﻿ 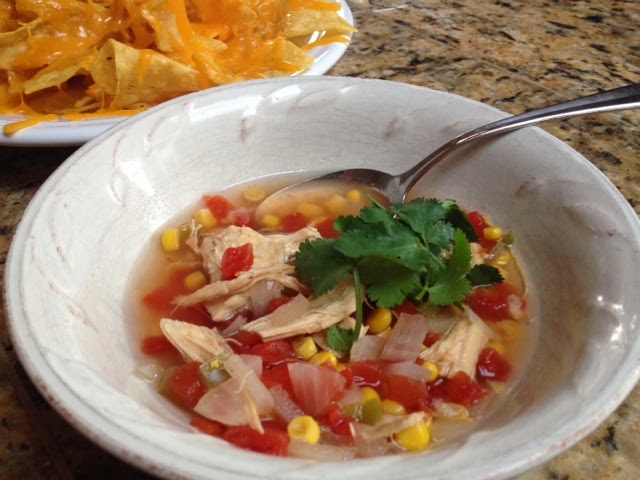 This was the bowl I served my daughter.  The first thing she said was, “Aren’t you going to fill that up some more?”  I told her that I’d see how she liked it and then she could always have more.  Well, she asked for seconds and told me it was her new favorite soup.
Here’s the recipe that I adapted from Pinterest:
1 carton of chicken stock
1 can of corn- drained
1 can of diced tomatoes, drained and rinsed
1/2 of a white onion, diced
2 cooked chicken breasts, cut into pieces
1/4 of a small jalapeno, diced
1/8 tsp chili powder
1/8 tsp garlic salt
salt and pepper to taste
Cilantro for garnish
Cook in a Crock-Pot, on high, for 4 hours.
My daughter said she like the “little kick” of heat as she was eating it.  We don’t usually like spicy foods, which is why we only used a quarter of a jalapeno and an 1/8 tsp of chili power.  Still, it had enough spice that she liked it, but wasn’t overwhelming.
Happy Crock-Pot Cooking!﻿

I posted this recipe for Crockpot Lasagna quite a while ago.  When I made it for dinner last night, my son started begging me to make it more often.  My whole family loves it, so I figured it’s worth a repost. First, let my say that when you dish it up, straight out of the crockpot, it does not look this pretty.  Honestly, it looks like a sloppy mess.  This picture was actually taken of the leftovers.  Once it’s cooked, it cuts perfectly and looks much prettier.  But, who am I kidding, no one in my family cares about pretty lasagna.  They just want yummy lasagna.

Here’s what I did:

I buy 2 bottles of Newman’s Own Alfredo sauce when I make lasagna. For this recipe I also bought some precooked chicken sausage.  It was one of those yummy sausages from Costco that has sundried tomatoes and cheese inside.  I’ve also made it with browned Italian sausage, but use what you like.

Pour a little Alfredo in the bottom of the crockpot. Then put in a layer of lasagna noodles.  I use the kind that you don’t need to boil ahead of time.  The noodles are rectangular and my crockpot is oval, so I had to break the noodles up so they would fit.  Next comes a few spoonfuls of the ricotta mixture, then chicken sausage, and a handful of mozzarella cheese.  I continued alternating those ingredients until I ran out.

I set my crockpot to low for 5 hours, and then had it switch to warm until I got home.  (I love having a crockpot that I can program like that!) 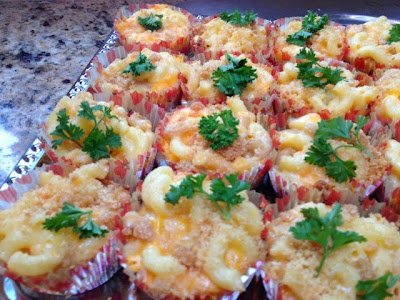 I make Mac & Cheese quite often at my house.  My kids LOVE home made mac and cheese, and I will happily spend my time preparing something that’s not loaded with all of the chemicals that are found in that “blue box” I served my kids for years.  Once in a while it will find its way into my house, but for the most part we buy an organic boxed mac and cheese, or make it from scratch.
My kids’ favorite it smoked Gouda mac and cheese, but cheddar cheese and cream cheese are the stars of the show in this recipe.﻿ 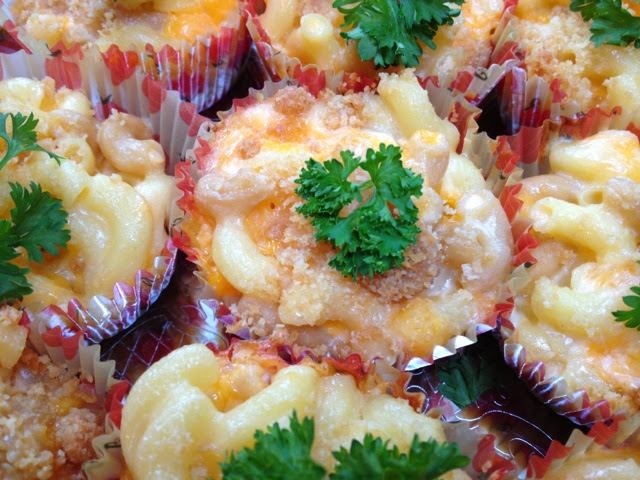 Crush up the crackers and add melted butter.  Spoon this into 16 muffin tins, reserving about a quarter cup for topping.  I used paper liners, sprayed with a little olive oil. Cook and drain the noodles.  Add cream cheese, Parmesan cheese, and 1 cup of cheddar cheese to the cooked and drained noodles.  Stir until mixed together.  In a separate bowl, mix eggs, half and half, sour cream, and salt.  Combine the two bowls.  Add the remaining cheese and mix it up.  Use an ice cream scoop to spoon the mixture into the muffin tins.  Sprinkle with the remaining cracker crumbs.  Bake at 350 for 20-25 minutes.  Garnish and serve warm.

I brought an appetizer to Dodgeball last night and several people asked for the recipe, so I thought I’d do a repost.  That way it’s easy to find.

Here’s a super-simple recipe for you to tuck away until you need a last minute appetizer for a party.  It’s almost embarrassing to call this a recipe, because it’s that simple. Start with a block of softened cream cheese.
Chop a small handful of basil and mix it into the cream cheese (sometimes I mix in a little pesto too).
Spread the mixture on a plate.
Top with pesto (homemade is best, but store bought will do just fine).
Dice up a few sundried tomatoes and spread those over the top.
Garnish with a sprig of fresh basil. We served this dip with Pita chips and it was pretty yummy.    See, I told you.  It should even qualify as a recipe.  Super simple! This dish might just make its way into regular rotation.  It reminds me of a lasagna, but Mexican style.

Directions:
Mix sour cream, Cream of Chicken, and taco seasoning in a small bowl. Set aside.
In a large bowl, mix chicken, beans, corn, salsa, and 1/2 cup of cheese.
Layer the ingredients in a 9×13 pan, like you would for lasagna.

Bake for about 30 minutes at 350 degrees.
We served this with homemade pico de gallo, chips, and salad.  Everyone said this recipe was a keeper! I’ve been meaning to post my Ranch Dressing recipe for ages, and today I’m finally getting around to it.

I’ve been working on finding the perfect Ranch recipe for about a year.
I don’t like tangy dressing.
It can’t be hot or spicy.
I really love buttermilk, but not mayo.
It has to be salty and not sweet.
It can’t overpower the salad.

Ok, then. You can see why it’s taken me a year to figure this out.  I thought I had the perfect recipe (pictured above) and then my friend Leslie showed up at my doorstep with something new to try.  She makes a powdered mix and then adds the wet ingredients later.  It’s pretty yummy and has me rethinking my recipe!

Here’s the recipe I have come up with so far.  I’m sure it will change, but for now, I think it’s a keeper.

I make this in a food processor and in mixes up in about 20 seconds.  The only problem I’ve found is that a lot of dressing is wasted.  I don’t eat that many salads during the week, and since there are no preservatives, it only lasts as long as the sour cream and milk.
If you have a great dressing recipe, I’d love to hear about it!  As much as I love this one, it’s still a work in progress.  Thanks, Leslie, for the sample of your dressing! It was a grape playdoh making kind of day.  My youngest loved playdoh when she was younger.  She’s lost interest over the years, but today it was a different story.  I had to make a new batch of playdoh for the classroom, and somehow caught the attention of an 8 year old helper.  (She smelled the grape Kool-Aid and wanted to see what I was up to.)