I’ve always loved clam chowder.  I consider it my personal mission to find the best chowder in the Pacific Northwest.  So far, in my opinion, Pike Place Chowder holds the record.  Their Salmon Chowder (ok, I know I said CLAM chowder, but it’s just really good) is to die for!  I’ve made several different recipes over the past few years, trying to find my own perfect version of clam chowder.  Well, friends, I think I’ve come up with a homemade winner!  Now, it doesn’t even compare to Pike Place Chowder but my family agreed that this one is pretty good.﻿ 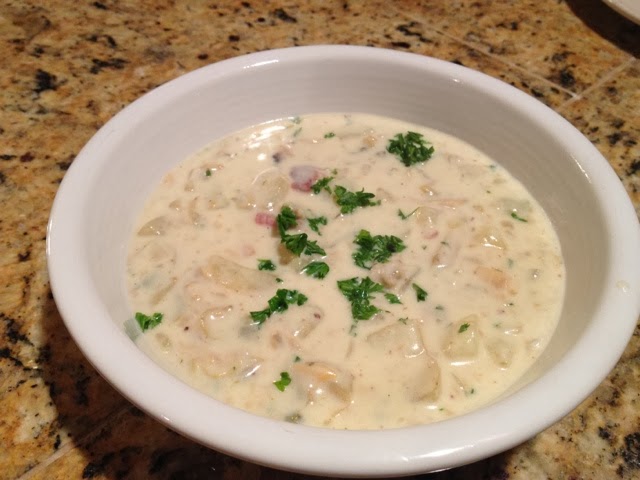 My recipe requires a couple of different pans.
Start by frying up 5 pieces of thick bacon.
Chop the cooked bacon and drain the grease, but don’t clean out the pan completely. We like those little bits of fried bacon that are stuck to the pan.
Add some chopped onions to the bacony pan and saute until translucent.
I used about half an onion, but use whatever you have or like.  Green onions work too.
Then, add some diced potatoes.  I used 5 Yukons, peels off.  Again, use what you like.
Once the diced potatoes are in the pan with the onions, add the juice only from 2 ten ounce cans of baby clams. Put a lid on the onions and potatoes and cook over medium heat until the potatoes are soft.
Time for pan #2.  In a large pot, melt 1 stick of butter.  Add 1/2 cup flour.  Cook the flour slightly, and then SLOWLY add a quart of half and half.  Cook this mixture until it thickens. I used my hand blender at this point to make sure the flour, butter, and half and half mixture didn’t have any lumps.  Throw in the baby clams and chopped bacon, and add the potato/onion mixture to the big pot.  Add a teaspoon of salt and a handful of chopped parsley. If you like your chowder on the thin side, add a little milk to thin it out.
Dinner is served!
Again, here are the ingredients:
5 pieces fried thick bacon
1/2 large onion
5-6 diced potatoes
2  ten ounce cans of baby clams
1 stick of butter
1/2 cup of flour
1 quart of half and half
2 Tbsp chopped parsley
Happy cooking!﻿